Chaz Davies’ 2015 Ducati was bought by an anonymous racing enthusiast in Dallas and imported on behalf of Advanced Motorsports (AMS) Ducati Dallas. Juan Arango, 1 Trade Logistics’ VP of Operations, has a long-standing relationship with Ducati and races them in his spare time.

In 2015, Chaz Davies rode the Panigale R to top finishes in the Spanish, Malaysian, and US Rounds while placing in an incredible 18 of the 26 FIM World SBK races. Davies came in 2nd overall for 2015 and has already won 4 races in 2016. Before Ducati sold the superbike to an anonymous Dallas collector, he autographed it.

The buyer got a real masterpiece. The 2015 Ducati Panigale R was built to be a champion. The Panigale’s chassis (essentially the bike’s structural backbone) is made from aluminum, making it compact, rigid, and lightweight all at the same time. The heart of the Ducati Panigale R is a 1,198 cc Superquadro engine that pumps out an incredible 205 horsepower and 110 pound-feet of torque. All that power travels through a six-speed gearbox that was specifically designed to enhance the efficiency of the engine. The Ducati Panigale R is capable of going from 0 to 60 mph in just three seconds to go with a top speed of 202 mph. (Source). The superbike is not street legal and may only be driven on a closed track. 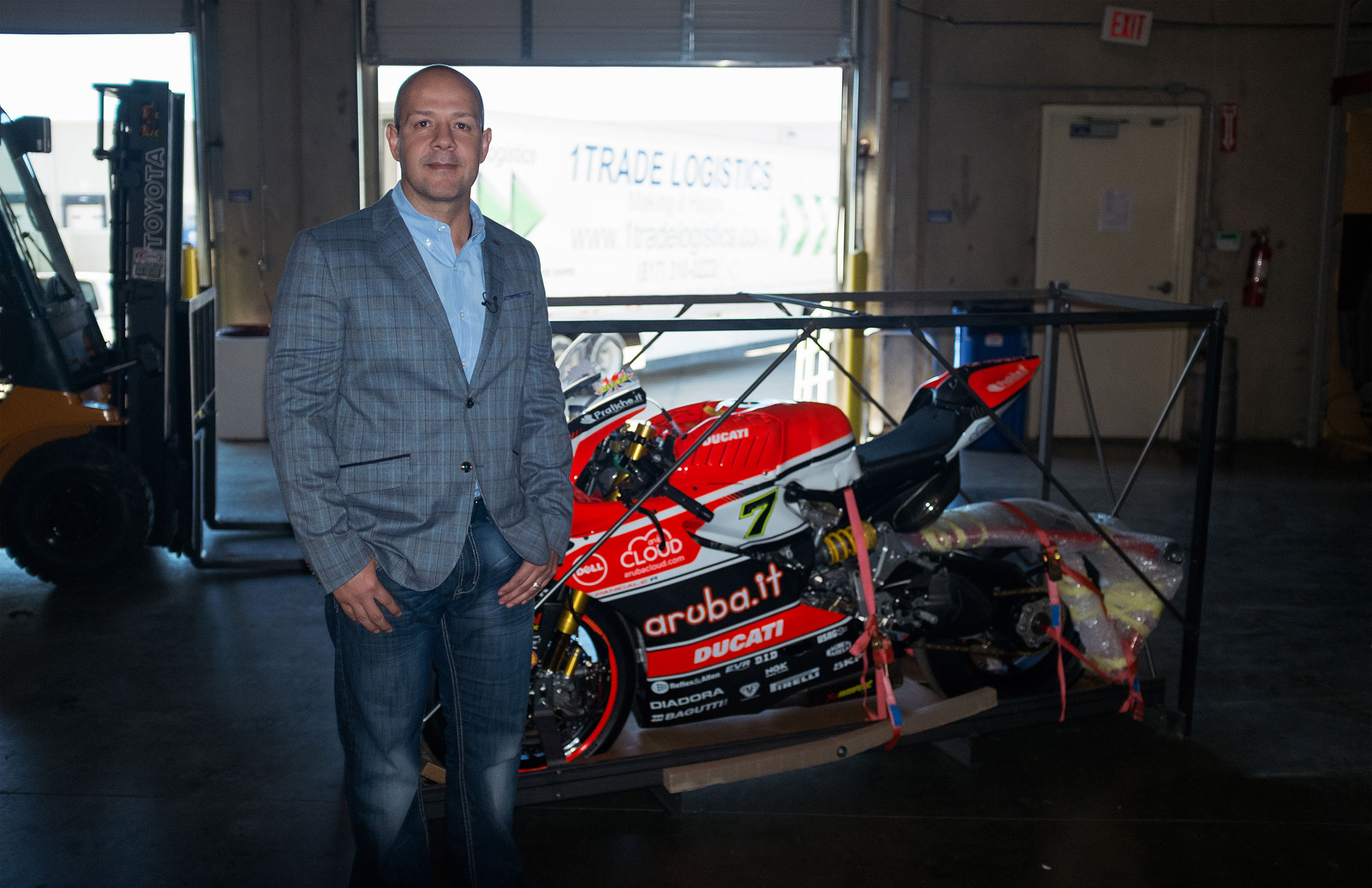 After Davies won his first race on the Panigale R for Ducati, he remarked “This has been my only goal since coming to Ducati and I’m very pleased to have achieved this result here. It’s extremely important to me, to be able to repay Ducati, Aruba.it and all of the ducatisti with the first win for the Panigale R.”

1 Trade Logistics shares Ducati’s love for speed and high-performance, in both racing and logistics. “I’ve always loved Ducati and to ensure the delivery of this champion bike is a dream-come-true for me,” says VP of Operations Juan Arango. Transporting a high value superbike does come with its challenges. “The bike has to be flown in from Bologna, so it has a long journey, then it must goes through EPA, DOT, and customs. We have to make sure everything is done in accordance with federal and state regulations. We also have to provide high-security once it arrives safely.”

Jeff Nash, Owner of Advanced Motorsports (AMS) Ducati Dallas, says about 1 Trade, “They’re the go-to guys for getting projects like this handled. They make it seamless. If you give them a job, it gets done.”

1 Trade Logistics is a premier, full-service transportation and logistics company based in Dallas / Fort-Worth, TX that provides expedited freight forwarding, logistics management, supply chain solutions, and an international courier service. 1 Trade Logistics is a member of the World Cargo Alliance (WCA), is the DFW hub for the Conqueror Freight Network, carries a Minority/Women Business Enterprise (M/WBE) and TSA Certification, and is fully licensed through the FMC, IATA, and NVOCC to name a few. Learn more about their transportation and logistics services in Dallas / Fort-Worth at 1tradelogistics.com

“They make it seamless. If you give them a job, it gets done.” - Jeff Nash | AMS Ducati Dallas

Get a Freight Quote